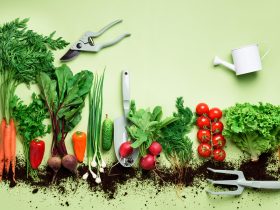 How to Grow Your Own Food

What are Fungus Gnats?

The term “fungus gnat” refers to different insects under the superfamily Sciaroidea. There are insects in several families (i.e., sub-families) that are known as fungus gnats. Some fungus gnat families are:

Fungus gnats undergo complete metamorphosis. While their adults feed on nectar and other sugary liquids, larvae feed on fungi hence the name “fungus gnats.” Note that in nature, fungus gnats help to pollinate plants and transport mushroom spores to different locations. So they are not entirely evil creatures.

How to Identify Fungus Gnats

If fungus gnats are in your area, you must have seen them a million times. They look like tiny mosquitoes. They have two transparent wings and long crooked legs.

Since many insects fit that description, here are some additional ways to identify fungus gnats:

Adult fungus gnats are attracted to (and they cannot resist) the color yellow. Place a yellow sticky note (sticky part facing up) close to the plant baseA base is the lowest part of an organism or organ. The base can appear as though it is above, but it is the lowest part of an organ (i.e. upper organ). A base can also represent the root crown of trees. or any location where you suspect there may be fungus gnats.

If you see that the insects are flying towards the sticky note and are trapped by it, they are most probably fungus gnats.

Cut a potato in half and keep the potato in the soil (freshly cut part nearer to the soil). As the potato decays, more fungi will grow on it. The larvae of fungus gnats are attracted to fungi, so you should see fungus gnat larvae attached to the potato in less than three days.

This is not really a test but a simple observation. If the potting soil is mostly damp and cream-colored larvae are seen in it when dug, there is a high probability that the larvae seen are larvae of fungus gnats.

The best way to identify fungus gnats is to combine all three tests above. Do you want to know how these pests found your plants?

How Do Fungus Gnats Locate Plants?

Fungus gnats are bio-indicators. Bio-indicators are living organisms that can be studied to understand their environmentThe factors influencing an organism (both internal and external). The surrounding of an organism.. For example, the prevalence of mosquitoes suggests that there is a lot of stagnant water in the area.

Are Fungus Gnats Harmful to Plants or People?

Are fungus gnats harmful to people? Well, they do not cause any harm in terms of diseases, but they can be annoying, especially when they perch on people’s faces. Adult fungus gnats are slow fliers and usually do not fly for very long distances. They cause no threat to humans.

While they do not harm plants by eating their leaves, adult fungus gnats can harm plants by spreading Pythium, a disease that causes damping-off in plant seedlings. These adults also lay eggs close to plants. These eggs hatch into larvae that feed on fungi but can also feed on plant roots.

Since fungus gnat larvae feed on fungi in the soil, they can be bio-indicators of soil quality (i.e., fungi-rich damp soil). Also, keep in mind that fungi decompose dead materials. If fungus gnats start to eat plant roots, it either means that your plant roots are dying or your plants have root rot.

Fungus gnat larvae eat the fungi that are decomposing the dead (or weak) roots of your plants.

Some observable symptoms that suggest that your plant roots are being attacked by fungus gnat are:

You’ll know fungus gnats are in the soil if your plant is showing some root disease-related signs.

If there are fungus gnats in your garden or pot, how do you get rid of them for good? Continue reading and we’ll tell you how.

How to Get Rid of Fungus Gnats For Good

Before we process, you should know that it is not easy to get rid of them at once because many phases and generations live there. A technique used to get rid of adult fungus gnats may not be very effective for their larva.

Also, note that newer generations of insects adapt quickly to products that were effective in killing older generations.

When getting rid of fungus gnats, you have to be consistent. What techniques are available to get rid of them? Find your preferred technique below:

1. Allow Soil to Dry Before Watering

This is an easy way to get rid of future generations of fungus gnats. If you allow the first 3-4 inches of soil to get dry before you water again, adult fungus gnats will look for other soil to lay their eggs.

Hypoaspis miles is a mite that preys on larvae of insects such as fungus gnats. This mite will not harm your plants and reduce the fungus gnat larvae in the soil. You can get Hypoaspis miles in local gardening pest shops or online shops.

The Hypoaspis miles mite loves the same soil condition as fungus gnat larvae, so you do not have to worry about them in the soil. You should apply them by pouring a few into the soil around the base of the plant.

Do not worry. They will either leave or die when there are no more fungus gnat larvae (or other larvae that they feed on) in the soil.

Bacillus thuringiensis is a bacterium that attacks larvae of insects such as mosquitoes, fruitFruits are seed-bearing pods formed by the ripening of a plant pericarp after flowering. Plants produce seeds after pollination. The seeds of plants are stored in sweet and nutritious pods called fruits. flies, and fungus gnats. You can buy mosquito dunks from online stores and local gardening pest shops.

Usually, mosquito dunks are dipped and left in stagnant water to prevent mosquitoes and other insects from growing in the water. To use mosquito dunks for fungus gnats, soak the pellets overnight and remove them later (you can reuse them).

Remember don’t overwater the plants to prevent root rot and other root-related diseases.

4. Use An Insecticidal Soap

Soaps usually kill insects quickly because they attack and denature nerve cells in insects. Insecticidal soaps are soaps that are more effective in killing insects and insect larvae. You can buy any brand of insecticidal soap.

As discussed earlier, adult fungus gnats cannot resist bright yellow colors. Maybe it is because they are anthophilous, so they love bright colors (i.e., bright colors can signify the presence of flowers that produce nectar).

You should strategically place yellow sticky notes or tapes in different locations near the plant. After a few days (or weeks), the population of fungus gnats will reduce.

Remember that adult fungus gnats feed on nectar and other sugar-rich liquids. The cider-vinegar trap is a mix of water, soap, and apple cider vinegar.

To use this trap, mix one-part water with one part apple cider vinegar. Pour the mix into a small container and pour a few drops of liquid soap. Place the container close to your plants’ root or other locations where adult fungus gnats can locate them.

7. Other Products to Introduce

Other products that you can use to control fungus gnats are:

The products above can help inhibit (or control) the growth of fungus gnat larvae. It would be best if you did extra research before using any of the above-listed products.

You should use nematodes with caution because some nematodes can harm your plants.

How to Treat Plants Infected with Fungus Gnats

If the soil is well-drained and the plant is healthy, fungus gnat larvae will not attack the roots of your plants.

How do you prevent fungus gnat larvae from reaching your plants? Continue reading.

How to Prevent Fungus Gnats from Reaching Your Plants

Do Not Overwater Plants

If you overwater plants, it can kill the roots or cause root rot. Weak or dead roots attract bacteria and fungi. If fungi are present in the soil, fungus gnats will be attracted.

Mulch the Soil with Sand or Indoor Mulch

You should use a fully aerated indoor mulchMulch is any material (mostly organic) that gardeners cover the garden soil with. Mulch can be used to prevent water from evaporating (therefore increasing soil moisture), prevent weed from growing, ec. Examples of materials used to mulch are straw, weed fabric, hay, dead leaves, etc. for your potted plants. A perfect example of indoor mulch to prevent fungus gnats is sand. Sandy soil is aerated and well-drained, so it will mostly appear dry and unsuitable for adult fungus gnats to lay eggs.

Do Not Use Organic Materials

It is not ideal to use solid organicAn organic material is any material derived from plants, animals, fungi, or microbe sources (i.e. living things) and is biodegradable. 'Organic' can also refer to the gardening practice that involve zero use of chemicals as fertilizers, pesticides, etc. Plants grown organically are healthier and produce fruits with more quality. materials as a source of nutrients for indoor plants because, aside from the possibility of attracting pests, they can alter the composition of your potting mix or soil.

If you must use compostAn organic matter made from decomposed plant materials. Compost is often made from decomposing shredded leaves, hay, fruits, and other plant materials at a ratio of 25 part dry brown materials to 1 part fresh green materials. for your indoor plants, make sure that the materials are fully decomposed. It is not recommended to use manure for your indoor plants, but if you insist, make sure that it is well-rotted.

Note: If you use manure and compost indoors, your potting soil or mix might become unable to drain water quickly.

It is often difficult to keep the soil in pots and containers well-drained. If available, you should use a potting mix instead of soil for your potted plants.

But, if you must use soil, perforate many holes in the pot base to encourage water drainage. Also consider checking out our past article on how to choose the best potting mix for vegetables. You can also drain more water by placing rocks at the base (inside) of the pot before pouring soil over them.

Fungi will not attack the roots of healthy plants. Even though some plant roots will die naturally, fungi and fungus gnats attacking the plants will not harm them.

The bottom line is that you should keep your plants as healthy as possible to prevent the growth of populations of fungi and fungus gnats in the soil or potting mix.

Fungus gnats are small mosquito-like insects that pollinate plants, but can be annoying when they perch on your face or begin to damage your precious plants. Fungus gnat larvae feed on fungi but can attack plant roots if fungi are growing in the root. As bio-indicators, the presence of fungus gnat larvae suggests that soil is full of fungi and is not well-drained.

Have your potted plants been attacked by fungus gnats? Have you successfully gotten rid of the annoying insects? What method did you use? Share your thoughts in the comment section below. 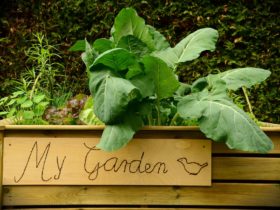 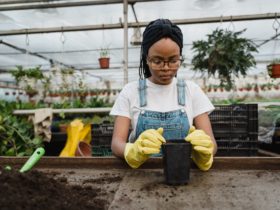 Growing Mushrooms in a Greenhouse 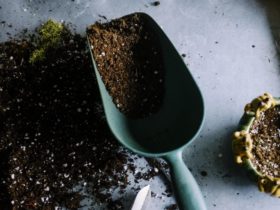 Best Potting Soil for Vegetables – How to Choose

Growing Mushrooms in a Greenhouse

Best Potting Soil for Vegetables – How to Choose 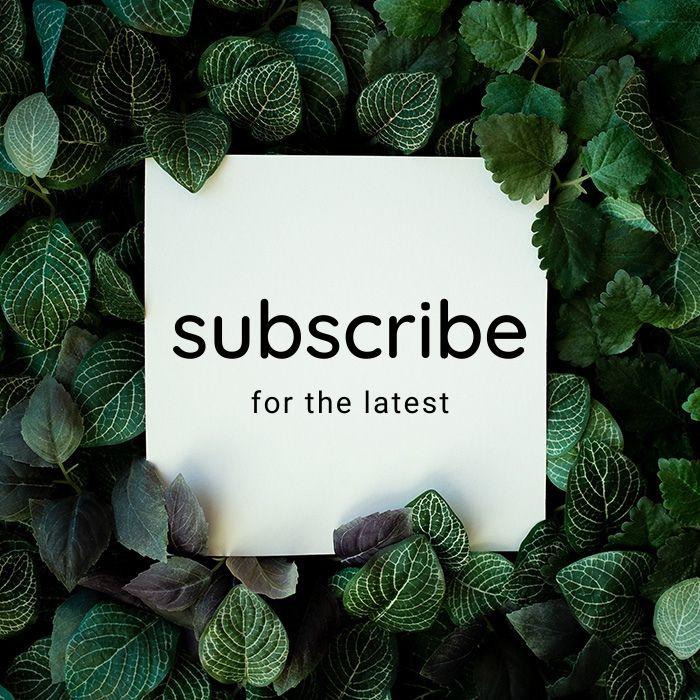 Get seeds of wisdom straight in your inbox.

Get seeds of wisdom straight in your inbox.